The tech-heavy Nasdaq 100 fell about 3 percent amid a loss to giants like Tesla and Apple.

Stocks fell after data showed that US inflation will remain high for quite some time, adding to concerns that the Federal Reserve may be forced to trigger more tightening measures that could lead to the economy into a recession.

Comments from Fed Bank of Atlanta President Raphael Bostic also did not help sentiment, as the official said he is willing to “go further” on rates if inflation remains elevated. The S&P 500 erased gains and fell to its lowest level since March 2021, while the tech-heavy Nasdaq 100 fell about 3% amid a rout at giants like Tesla Inc. and Apple Inc. Small caps sank after a rally that approached 2% earlier in the day. The Treasury curve flattened and the gap between two-year and ten-year yields narrowed by nine basis points.

Blinken assures UAE leader of US help over Houthi attacks

US: Those helping wealthy Russians hide assets will be prosecuted

Investors seem to agree that a 75 basis point hike is not likely, based on prices in the fed funds futures markets. But they did raise bets that the Fed will implement another half-point hike in September, after hikes of that size in June and July. The US central bank raised interest rates by half a point last week and Fed Chairman Jerome Powell has signaled similar rate hikes are on the table for the next two meetings, while declining to do a bigger move.

While annual measures of consumer prices have cooled slightly from March, signaling a spike economists had expected, details in a report on Wednesday painted a more worrying picture as monthly figures advanced more than expected. Service costs accelerated while inflation for most goods remained stubbornly high, underscoring the persistence and breadth of price pressures. 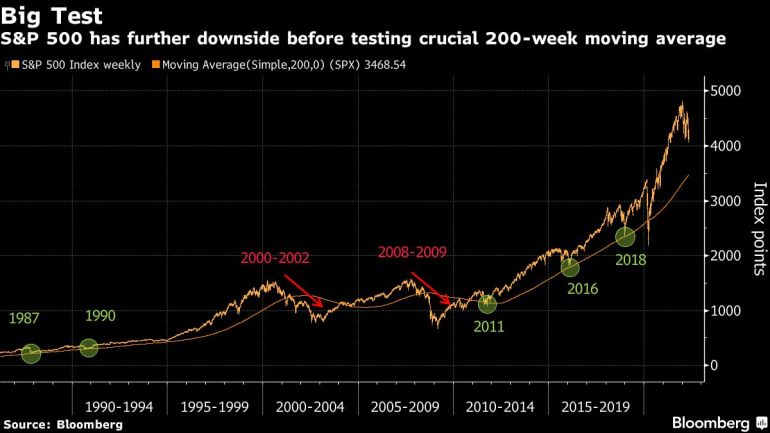 The stock slide isn’t over yet, according to strategists at Morgan Stanley, who see room for stocks to correct further amid growing concerns about slowing growth. Strategist Michael Wilson, who has long been skeptical of a decade-long bull run in US equities, said in a note that even after five weeks of declines, the S&P 500 is still mispriced for the current environment. of the Fed’s tightening policy to slow growth.

“We continue to believe that the US equity market is not priced in for this slowdown in growth from current levels,” Wilson said in a note. “We expect equity volatility to remain elevated over the next 12 months.” He recommends defensive positioning with an overweight in health stocks, utilities and real estate.

The S&P 500 may be at risk of a further drop towards 3600 points, down 10% from Tuesday’s close, before reaching a historically important technical support level. The 200-week moving average since 1986 has seen the US benchmark rally during all major bear markets except the tech bubble and global financial crisis.

Here are key events to watch this week: