US stocks rose as traders weighed the strength of corporate earnings against data showing the US economy unexpectedly contracted last quarter.

Thursday’s relief rally marks a jittery week marked by China’s struggle to suppress Covid, Russia’s war in Ukraine and concerns that the Federal Reserve’s monetary tightening could tip the US economy into a recession.

“Earnings season in general has been more good news than bad and could help investors shift focus from the macro headwinds that have plagued major indices this month,” said Art Hogan, chief market strategist at National Securities. . Of the 140 S&P 500 companies that have reported to date, 77% have beaten their earnings estimates and 65% of reporters have raised full-year guidance, raising overall earnings expectations for S&P members 500, according to Hogan.

The results of Amazon.com Inc. and Apple Inc. due to be published on Thursday will be closely watched given their enormous influence on US stock indices. Twitter Inc., in one of its last earnings reports before Elon Musk take the company private, missed analysts’ revenue estimates, reflecting a slowdown in advertising. 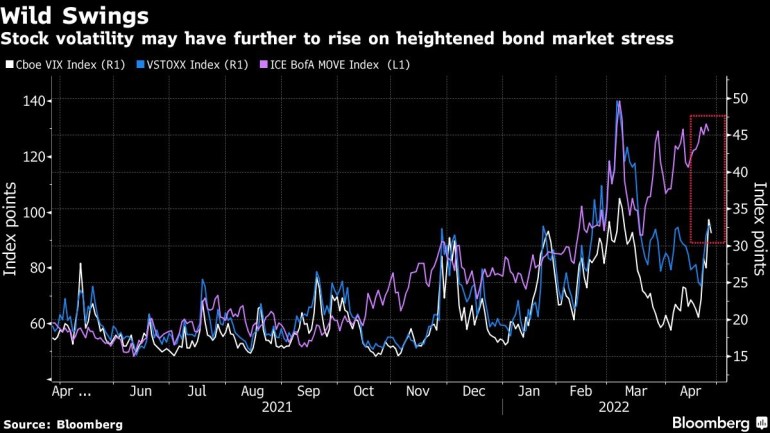 A contraction in gross domestic product data, the first since 2020, could be a worrying sign for traders as a widening trade deficit and softer inventory growth are undermining a strong consumer and business demand picture.

US official warns of ‘protracted’ war as Russia shifts aim

US will sanction Putin for invading Ukraine, White House says

“Not a strong starting point for the real economy which will face a much tighter monetary policy environment as the Fed proceeds with rate hikes,” BMO’s Ian Lyngen wrote of the Q1 GDP release. . “The Fed has only delivered a single 25bp hike.”

Treasuries reversed gains and the benchmark 10-year yield rose to around 2.84%.

Oil prices were little changed, with West Texas Intermediate futures wiping out earlier gains to trade above $101 a barrel.

And in currency markets, the yen’s plunge to a 20-year low could signal a rewrite of the global currency playbook. The offshore yuan sank, the euro retreated along with the pound, and the ICE dollar index hit a two-decade high.

The Nasdaq’s average daily move over the last 100 trading days hit close to 1.6%, the highest reading since the early days of the pandemic, according to Bespoke Investment Group. There have only been four other periods that averaged such daily volatility; in addition to the pandemic, they include the dot-com crash, the 2008 crash, and 2011. “Volatility like we’ve seen over the last four months doesn’t come around very often,” the bespoke strategists wrote in a note.

In Europe, natural gas prices fell after two days of gains as buyers weighed options to continue getting supply from Russia without violating sanctions. European Union members are pressing the bloc to provide clearer guidance on Russia’s demand for ruble payments, and Germany has signaled that it is open to a gradual ban on imports of Russian oil.

Events to watch this week:

What Ford, a pioneer of the 9-to-5 workweek, is learning about the hybrid office
Biden seeks powers to use Russian oligarchs’ assets for Ukraine
Related posts
National