The events with the war in Ukraine and the ensuing sanctions on Russia have caused a roller coaster ride of wild prices in the oil market.

Oil slumped as Russia said it was taking steps to “de-escalate” the conflict in Ukraine, while raising the possibility of a meeting between President Vladimir Putin and his Ukrainian counterpart Volodymyr Zelenskiy.

US treasury secretary says Biden wants Russia out of G20

Futures in New York fell more than $7, briefly dipping below $100 a barrel before posting some losses in the latest string of big swings in the oil market. Moscow said it would sharply scale back military operations near the Ukrainian capital of kyiv, even though troops had already been stalled there for weeks.

Russia’s chief negotiator said there is a willingness to consider a presidential meeting between Putin and Zelenskiy. kyiv has long sought direct talks, while Moscow has resisted committing to Putin’s involvement.

“Fundamental traders and investors have taken their chips off the table in crude due to extremely high volatility, leaving the major players in the market as traders looking to hedge geopolitical risks,” said Rebecca Babin, senior energy trader at CIBC Private Wealth Management. 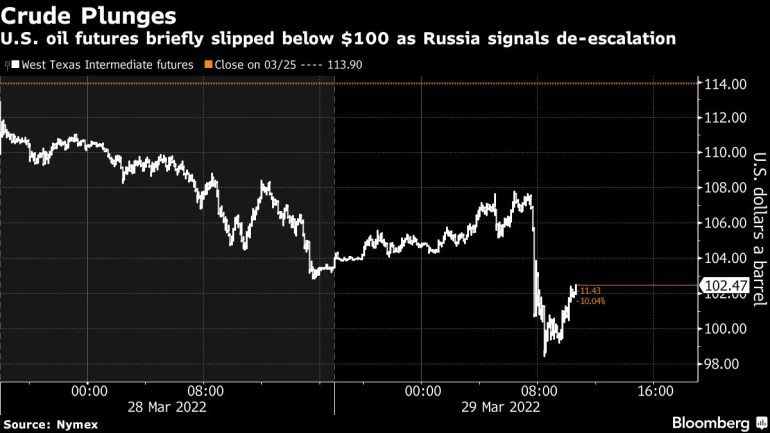 Events related to the war in Ukraine and the ensuing sanctions against Russia have caused extreme price swings in the oil market, making investors wary of trading. For the month of March, WTI fluctuated on average over $9 per session, yet another indication of the liquidity problems currently facing the market.

Prices were also lower on Tuesday as China grapples with its biggest Covid-19 outbreak since the pandemic began. The latest restrictions in Shanghai could cut oil demand by as much as 200,000 barrels a day for the duration of the restrictions, consultancy Rystad Energy said in a report.

“We’re still in the $100 environment, for sure,” Paul Sankey of Sankey Research in New York said on Bloomberg TV. “China is taking heat out of the market, but if the heat comes back, that adds up to $10” per barrel.

Crude has traded largely above $100 a barrel since Moscow invaded Ukraine on concerns that supplies from one of the world’s biggest producers could be disrupted. Oil majors including Shell Plc and TotalEnergies SE have already announced plans to eventually stop trading Russian oil and the value of the nation’s barrels has plummeted.