US Senate will vote on abortion bill next week, Schumer says

Cryptocurrencies continued their declines as Russia’s attacks on targets across Ukraine rattled risk assets as Bitcoin plunged to a one-month low.

The largest token fell 8.5% to $34,337 after Vladimir Putin’s attempt to demilitarize Ukraine kicked off with a series of missile strikes on Thursday. While Bitcoin has cut its losses, it is still down almost 50% from its all-time high in November. The second-ranked Ether fell as much as 12% to $2,301.84. Other cryptocurrencies such as XRP, Cardano, and Solana also fell. 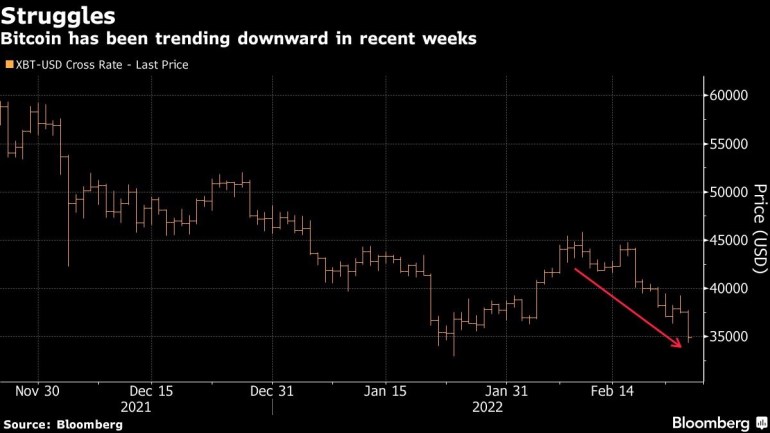 Bitcoin’s volatility during escalating geopolitical tensions over the past few weeks has undermined the argument that cryptocurrencies offer a hedge in tough times. According to Ben Caselin, head of research and strategy at crypto exchange AAX, this is largely a result of its deepening integration into global financial markets, which causes it to act like other risk assets.

“It’s a different level of concern,” said Kenny Polcari, managing partner at Kace Capital Advisors. “When the compulsion comes and people think about security and where to put their money, I think gold is outpacing Bitcoin.” 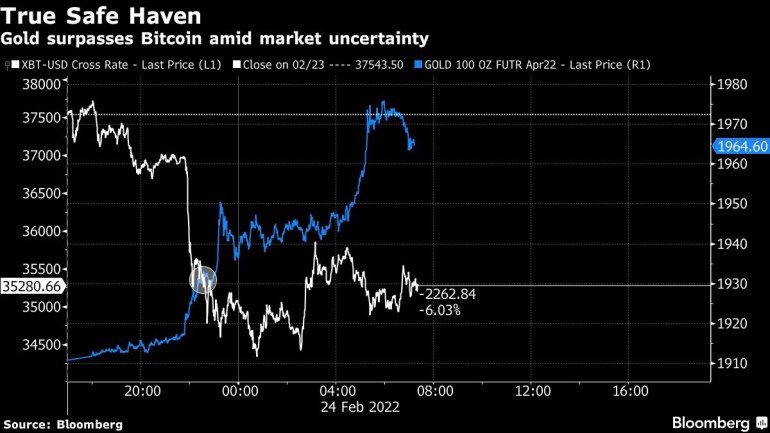 The Russia-Ukraine crisis “could bring prices down significantly in the short term,” said Jonathan Tse, head of trading for the Copper.co crypto platform. “However, instead of an ongoing crypto winter for prices to slowly drop, that may be what it takes to find the bottom sooner.”

Vijay Ayyar, vice president of institutional development at crypto platform Luno, said that in case of further declines, the next key level to watch for Bitcoin will be $28,000 to $29,000. If that threshold is exceeded, “we could be looking at much lower lows of $20,000 and below.”