World stocks slumped on Thursday, while bonds and oil soared as Russian President Vladimir Putin’s decision to order a military attack on Ukraine cast a shadow over world markets.

The S&P 500 and Nasdaq 100 fell, with the latter falling 3.2%, putting the gauge at risk of a bear market. The Stoxx 600 Europe Index lost 3.8% and Asian stocks fell to their lowest level since 2020. Russian stocks fell the most on record after a trading suspension ended.

Russian military vehicles invaded the Kyiv region from Belarus to the north, Ukrainian officials said, after the tanks reportedly entered Ukraine from Crimea. Putin said Russia did not plan to “occupy” its neighbor, but such action was necessary after the United States and its allies crossed Russia’s “red line” by expanding the NATO alliance.

Western powers condemned the military incursion and vowed to increase sanctions against Russia: President Joe Biden said the United States and its allies will impose “severe sanctions.” European leaders are planning sanctions that will target Russian banks. The Kiev government called it a “full-scale invasion” as it declared martial law and called for international support, including tougher sanctions against Russia.

“The invasion is a worse scenario than some investors anticipated. That’s why we’re seeing the backlash,” said Keith Lerner, chief market strategist at Truist Advisory Services. “It caught some investors off guard.”

European crude and natural gas rose on possible risks to Russian energy exports, with Brent futures trading as high as $105 a barrel and the benchmark West Texas Intermediate index crossing $100.

The flight to safety sent the 10-year US Treasury yield down 10 basis points to below 1.9%. Gold hit its highest level since September 2020.

The dollar and yen rose, while the euro and commodity-linked currencies fell. The ruble hit a record low against the dollar and the Bank of Russia said it will carry out currency interventions.

Pan-Africanism is the panacea to the West’s systemic racism 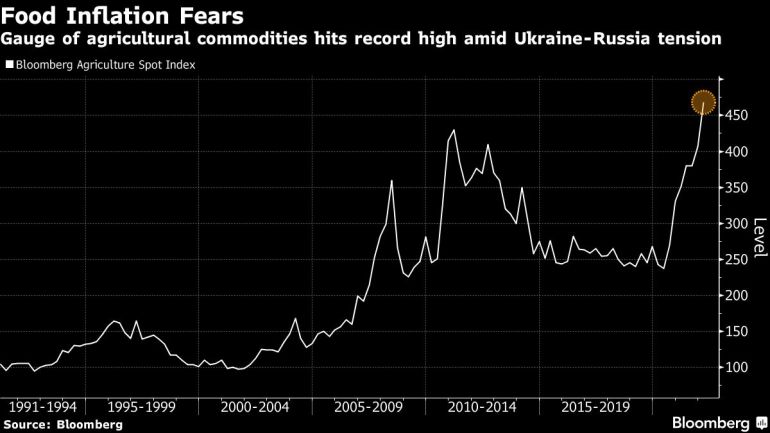 The cost of raw materials and food soared on concerns that flows will be disrupted by the unfolding crisis. Ukraine is a major grain exporter and the sanctions could isolate Russia, a commodity powerhouse. Natural gas in Europe rose as much as 42%, while metals also soared, piling up inflationary pressures.

That backdrop heralds new challenges to a global recovery that was already struggling with elevated price pressures and tighter monetary policy. Money market indicators for inflation expectations are rising again. Two-year breakeven rates on U.S. Treasury inflation-protected securities, or the difference between those yields and typical Treasury bonds, rose to the highest level since Bloomberg began compiling the data. in 2004.

“This is a triple whammy for the global economy, with a toxic combination of higher inflation, lower economic growth and heightened uncertainty,” said Ben Laidler, global markets strategist at eToro. “The only silver lining is that growth is strong, a buffer for any slowdown, and policymakers and investors are already primed for high inflation.”

Investors remain concerned that the Fed’s tightening could stifle expansion in the world’s largest economy. The Federal Reserve still expects hikes of six quarter points, five from the Bank of England and one from the European Central Bank by the end of the year. That is in line with what was quoted before the attack on Ukraine.

In cryptocurrencies, Bitcoin slipped to around $35,400 amid risk aversion. The second largest token, Ether, also suffered heavy losses as the most speculative areas of the markets took the biggest hit.

Here are some events to watch this week: