The war in Ukraine and the ensuing sanctions against Russia are driving oil volatility to historic levels.

Oil jumped to around $105 after falling for two days as liquidity and volumes remain low, exacerbating market moves.

Why is the US extraditing the former president of Honduras?

JPMorgan joins Goldman Sachs in pulling back from Russia

West Texas Intermediate futures rallied more than $5 after falling below $100 a barrel on Tuesday. Oil is experiencing one of its most tumultuous trading periods as the war in Ukraine and ensuing sanctions against Russia push volatility to historic levels. Covid infections in Shanghai and Beijing fell on Tuesday, providing some cautious optimism for improvement after lockdowns caused inflation to spike in April.

The oil market hasn’t been “consistent at all lately, which has put many off trading the commodity,” said Rebecca Babin, senior energy trader at CIBC Private Wealth Management. “Oil trading right now is like trying to figure out a teenager’s mood swings. It can feel like a wasted effort.” 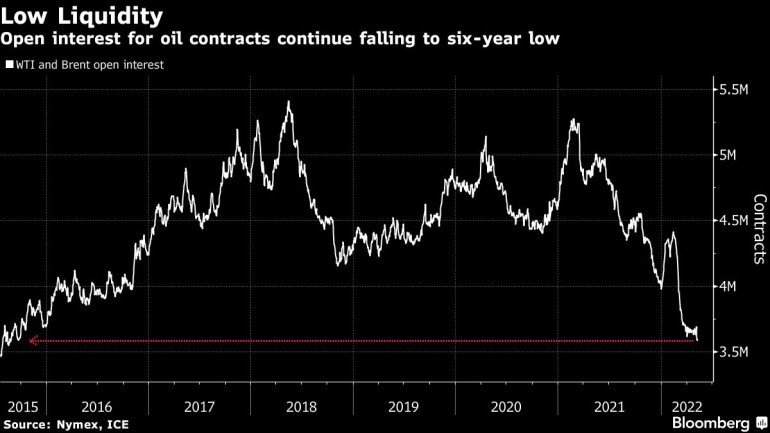 The oil market has been affected in recent months by the Covid-19 restrictions in China and Russia’s invasion of Ukraine. The war has stoked inflation, driving up the cost of everything from food to fuel, with retail gasoline in the US hitting a new record ahead of the summer driving season. In the US, consumer prices rose more than expected, indicating that inflation will persist at high levels for longer.

The American Petroleum Institute reported that US crude reserves rose by 1.62 million barrels last week, according to people familiar with the figures. Fuel inventories also expanded. Government data will be released later on Wednesday.

Traders continue to monitor the EU’s efforts to agree sanctions on Russian oil imports. On Wednesday, Hungary said it will only accept if shipments via pipeline are excluded.

Shanghai reported a 51% drop in new coronavirus infections on Tuesday, with zero cases found in the community, a key metric for the city to end a punishing lockdown that has entangled global supply chains and left dozens of millions of people trapped inside their homes for about six weeks.